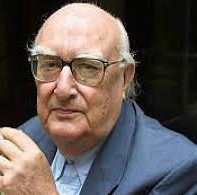 Born in Porto Empedocle, Camilleri studied at the Faculty of Literature in 1944 –although never graduated- while publishing poems and short stories. From 1948 to 1950 Camilleri studied stage and film direction at the Silvio D’Amico Academy of Dramatic Arts (Accademia Nazionale d’Arte Drammatica) and began to take on work as a director and screenwriter, directing especially plays by Pirandello and Beckett. He later worked on several TV productions, such as Inspector Maigret. In 1977 he returned to the Academy of Dramatic Arts, holding the chair of Film Direction for 20 years.

Camilleri’s first novel, Il Corso Delle Cose (“The Way Things Go”) was written in 1978, followed by Un Filo di Fumo (“A Thread of Smoke”) in 1980. Neither of these works enjoyed any significant amount of popularity. In 1992, after a long pause of 12 years, Camilleri once more took up novel-writing and his new book, La Stagione della Caccia (“The Hunting Season”) turned out to be a best-seller.
In 1994 Camilleri published the first in a long series of novels: La forma dell’Acqua (The Shape of Water) featured the character of Inspector Montalbano, a fractious Sicilian detective in the police force of Vigàta, an imaginary Sicilian town. The series is written in Italian but with a substantial sprinkling of Sicilian phrases and grammar. The name Montalbano is a homage to the Spanish writer Manuel Vázquez Montalbán.

During his lifetime, Camilleri has been awarded with the Crime Writers’ Association International Dagger (2012), the Nino Martoglio International Book Award (1998), and the RBA International Prize for Crime Writing(2008). Camilleri, recognized in 2001 as Grand Officer in the Order of Merit of the Italian Republic, now lives in Rome where he works as a TV and theatre director. About 10 million copies of his novels have been sold to date and are becoming increasingly popular in the UK (BBC Four broadcast the Montalbano TV series from mid-2011), Australia and North America.