Rococo sculptor and expert in stucco technique, born in Palermo -and may have never left Sicily. His skill and facility with stucco sculpture appears to arise without mentorship or direct exposures to the mainstream of Italian Baroque. Rudolf Wittkower describes him as an aberrancy in an otherwise provincial scene, a “meteor in the Sicilian sky”.

In 1677, along with Procopio de Ferrari, he decorated the small church of the Madonna dell’Itria in Monreale. His first independent work appears to be in 1682 in connection with an equestrian statue cast of Charles II of Spain and Sicily, which was cast in bronze by Gaspare Romano. The Serpotta family, including his brother (1653–1719) and his son Procopio (1679–1755), was immensely prolific, decorating the Oratory of San Lorenzo (1690/98–1706) with such a profusion of statuary, teeming with putti, that the walls appear to quiver with the movement of a crowd. He completed work also for the Oratory of Santa Cita (1668–1718), the Oratory of Rosario di San Domenico (1710–17), the chapel for the Ospedale di Palermo, the Archbishop’s Palace in Santa Chiara, the Badia Nuova and the Church of SS. Cosma e Damiano in Alcamo. His work at the oratory of the Compagna della Carità di S Bartolomeo degli Incurabili in Palermo has been lost. 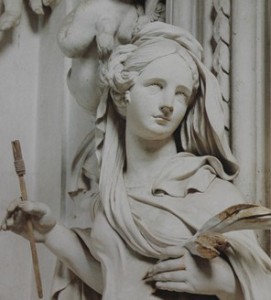 Giacomo Serpotta is credited with creating an original technique for polishing stucco, imparting to his work a luster not unlike that of stone. This is why stucco sculptures are often mistaken for polished stone. But while certain kinds of stone weather the elements admirably, stucco sculpture was usually reserved for architectural interiors –especially churches, civic offices and palatial homes. He also achieved striking effects of chiaroscuro by adding marble dust while the stucco was still wet.