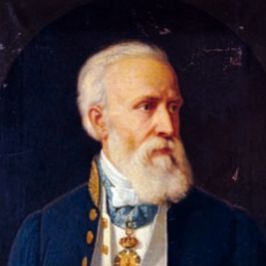 Born in Messina, scholar of Subba, he Royal College of Painting Carolino, in 1828 Panebianco was in Rome, thanks to a grant provided the Town Hall. In Rome, he enrolled to the Accademia di San Luca and attended assiduously the teachings of Camuccini and Natale Carta. In 1832, he returned to Messina where he started earning local recognition. It dates to around 1835, the “Good Samaritan” (now lost) presented later in 1838 the exhibition of Fine Arts in Palermo, an altarpiece with St. Anthony Abbot in ecstasy for the Cathedral of Aci Sant’Antonio (Catania), a “Madonna degli agonizzanti” for the Church of San Camillo de ‘Lellis of Messina and an Immaculate Conception for the church of Minors Conventual of the same city, both lost.

Of decisive importance it seems to have been one of his subsequent journeys completed between 1845 and 1846, with stops in Genoa, Naples, Milan (where he has the opportunity to meet Francesco Hayez and Luigi Sabatelli), Venice and Rome. In the capital Panebianco got connected with the circle of “purists”, who will influence especially his paintings of sacred subjects, and became friend with the sculptor Piero Tenerani. He returned to Messina in 1846, where he made the portrait of Cardinal Francesco di Paola Villadicani, archbishop of Messina, and a Nativity for the church of the monastery of Santa Caterina in Randazzo. Panebianco received also commissions for portraits of the aristocracy -biographers cite more than three hundred- such as the portrait of the Pennisi Floristella family, the Prince of Alcontres and portrait of a gentleman also in a private collection. 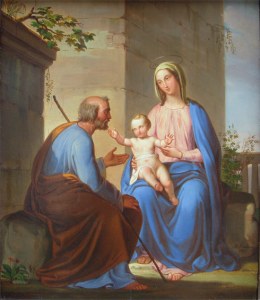 His moment of greatest success, coincides with the commission of the new curtain for the Theatre of St. Elizabeth in Messina. In a first round of the competition, Panebianco had presented the sketch of the tournament of the “Cavalieri della Stella”, now in a private collection. In 1850 he will win the competition with the sketch of “Gelo granting peace to the defeated Carthaginians as long as they would stop sacrifying human victims (Messina, Museo Regionale). Realized in 1852, the curtain went missing after the earthquake of 1908.

Panebianco was appointed director of the school drawing and painting at the University of Messina (1952) where he while still working on a large number of commissions of portraits and paintings of sacred subjects. In the summer of 1854, along with some students, including the young Dario Querci, he went back to Rome, stopping for about a year and a half. During this permanence in Rome, he started working on his large picture Attack of the Saracens against the knights of the Greens accompanying the Eucharistic Sacrament (formerly the Museum of Messina, destroyed in the earthquake of 1908) and became a member of the Congregation of the “Virtuosi al Pantheon”. Immediately after returning to Messina in 1856, Panebianco completed some paintings for the villa of the wealthy merchant from Messina Mariano Costarelli (Sacred Heart, St. Joseph and un’Annunziata in the private chapel, and in the ceiling of the living room which features Mercury to Jupiter Psyche in the marriage of Love, and large portraits of Costarelli and his wife now missing) and the Rest in Egypt (1859) for Peter Tenerani. 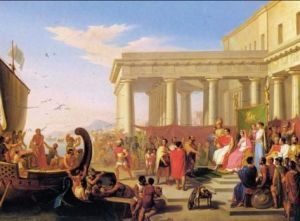 The years from 1861 until his death are dense with commissions. Biographers mention some altarpieces including: Sant’Eleuterio and Sacred Heart of Jesus in the Church Mother of Pozzo di Gotto (Messina); Sant’Agata visited by St. Peter (1861), in the church of St. Benedict of Acireale; The Stimmate of St. Francis, executed for the Church of Santa Chiara in Messina and now in the Church of Montevergine; The Apotheosis of St. Francis, already in the ceiling of the church of St. Francis in Messina; The Deposition from the Cross (1866) for the parish church of Altolia (Messina); Jesus with the cross and the Virgin Mary (1866) in the church of Maria Santissima Portosalvo Gallico Marina (Reggio Calabria) and A miracle of St. Nicholas of Bari (1867) in the church Mother of ceiling Venetico (Messina). It dates to 1868 an album with dozens of drawings depicting the Holy Family and other sketches now the Regional Museum of Messina.